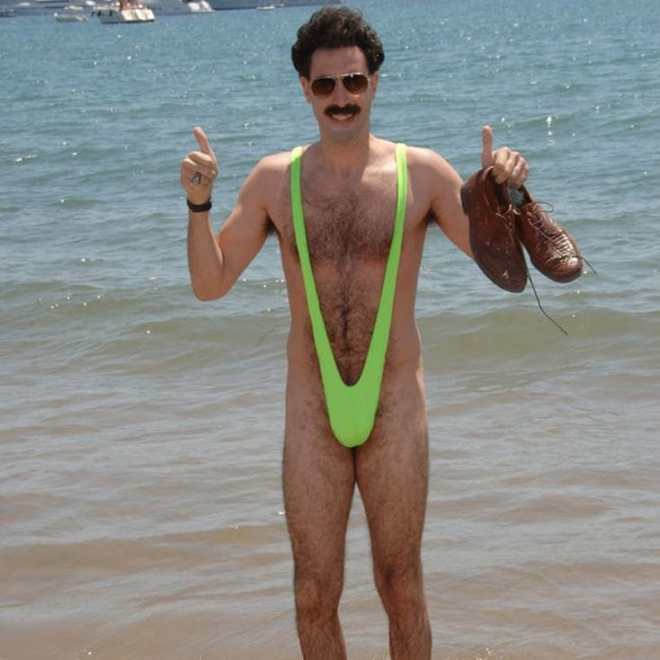 I wrote my first fashion blog a couple of years ago, and really I should have just left it there.  After all, my own mother once told me I dress like an off duty nun.  My younger sister says my penchant for baggy tshirts makes me look like a toilet attendant, and my older sister frequently tells me “You’ve let yourself go” (and that’s coming from someone who still thinks J2O is a trendy drink).  Undeterred, I struggle on, and here are my latest beach fashion tips…

I’ve raved about this brand before so you can imagine my excitement when I was asked to be part of their new video promotional shoot.  I received the call at 7pm asking me to go to a 6am filming the next day.  Admittedly my suspicions were a little aroused that I was possibly filling in for someone else, but I cast that negativity from my mind.  I quick nipped to the supermarket to buy a razor to shave my legs.  Usually I just buy the cheapest BIC razor, but that night I bought the Gillette Venus Swirl so my legs would be extra smooth.  The other girls who were doing it were all what I would call the Lamborghini and Mercedes Benz bodies of the town – whereas I am more of a Ford Escort.  However, the previous week I’d had a bad bout of gastroenteritis so suddenly I was the Ford Escort but with the sports package.  The next morning I live tweeted from the event, and I was going to do my first ever Insta story, but with the thrill of it all I couldn’t remember my password.  I didn’t really catch any good waves because I was so nervous, and then I got out first because the anxiety had made me exhausted.  On the beach I perched in what I imagined to be a coquettish fashion on the back of a quad bike because I thought the videographer might want some lifestyle shots, but he said he had to change his camera battery.  Then I did the tree yoga pose (because it’s the only one I can do) but again the videographer didn’t seem very interested so I shuffled off at the point.

I told absolutely everyone I knew that I was going to be in this video, so when it came out a few weeks later and I wasn’t in it, well, errr, I didn’t mind at all.  Of course not!  I never once woke up in the middle of the night whimpering “but what about meeeeee” into the silent darkness.  No Siree Bob!  Did I feel like a sad, bloated carrot that’s fallen down the back of the vegetable drawer and been forgotten?  Well okay, maybe a little bit, yes.   I know my diet consists mainly of jam roly-polys and cheesy potatoes but if I’d been given a bit more notice I would’ve tried a special cleanse.

So it’s a testament of how highly I think of these one pieces and bikinis that I still give them a big thumbs up.  The quality is excellent and the stylish cuts are very flattering.  They really do stay rock solid when you are surfing.   My favorites are the surf booty pants.  When I hang them on the washing line they require 2 pegs each, and this for me is a good sign.  The new bikini tops have a thick band under the bust and sort of push your boobs up and in.   The one pieces are classy and render men instantly vulnerable, and they’re great for surfing in because there’s no mad, crazy stuff going on.  You won’t get under boob, mono boob, quad boob, boob muffin top, nip slips, or boob sandwich.  The Mona online store is opening soon and I am stoked for them.

So here is the video (which I am not in), although actually if you pause it at 1’17 you can just about see my left calf (personally I think it’s the best bit).  I don’t blame the owner of the company because she’s lovely, but obviously the video guy didn’t know that I have a surf blog with a very committed following (and that includes all 3 of my followers).  But as I say, I’m absolutely fine about the whole thing.  It’s not something I dwell on at all.  I wasn’t even invited to the swimming pool bit

I’ve never actually owned a beach cover up, I usually just use an XL tshirt or a towel that’s been hanging around in the back of the van and is probably also used to towel down wet dogs.  But I’ve decided that’s all going to change in 2018 and I will become a figure of femininity and panache.  I really like this red cover up on swimoutlet.com because it reminds me of the dress that Scarlett O’Hara wore to Ashley Wilkes’s birthday party after they’d had that illicit snog at the sawmills and everyone gawped at her.

Living in a surf town it seems like everyone has a full sleeve, a roaring dragon on their back, or at least a lotus flower on their ankle.  With my zero tattoo status I have decided that I am displaying an edgy individualism.  I look like the kind of woman with a mysterious, chequered past and like I have a man in every port from Florianpolis in Brazil to Puerto Escondido in Mexico.  I have a look that says ‘anything could happen’. But the truth really is that I’m a complete wussy and I can’t even bear the excruciating pain of leg waxing.  I live in a town where virtually no female pubes exist.  So one day I booked my first (and last) Brazilian wax.  It wasn’t just the sheer agony it was also the embarrassment; and I swore that never again would I put my bacon strips through such an indignity.  I’m happy to say that’s a promise to myself which I’ve kept, and I’m pretty sure my pain tolerance level would never extend to tattoos.

I love this Aussie / Indonesian brand.  I have the turquoise nautilus pendant and every time I wear it someone asks me where I got it from.  I once went on a surf road trip with the company’s chief mermaid and she schooled me in Aussie slang.  I thought British slang was pretty good, but I have to say that Australian slang is far superior.  I became fascinated by the concept of the Aussie ‘bogan’ because I discovered that the bogan is very much like the kook in that both are multi-layered and highly nuanced individuals.  “Is this bogan?” I would constantly ask her.  “Yes” or “No” she would reply wearily.  With my intricate knowledge of this I can firmly say that themermaidcollective.com is not bogan.

Bintang singlets are an affront to anyone with a sense of decency or style.  They are worn by Aussie bogans and gringo surfers who want to talk about how they’ve surfed Uluwatu.  The exception to this is if you team a Bintang singlet with a Bintang hat and a Bintang stubby holder.  This look is so awful that it is actually brilliant

I’ve said it before and no doubt I’ll say it again, but every woman surfer needs a good cagoule.  Worry less about the bikini and think more about what’s going to protect you from the rain and wind as you stand around on the beach wondering whether to go in or not.  Patagonia and North Face do some great cagoules, but they are quite expensive.  Peter Storm is another good brand and it’s much cheaper.  My favourite cagoule last year was the Sassafras one Liam Gallagher wore to the One Love Manchester concert, but unfortunately they are currently sold out.

I am declaring the cagoule my ‘It piece’ of the season.

It has been brought to my attention that some men are reading kookbitches.  To them I say ‘welcome!’.  Sometimes when I tell people that I am a feminist they think that I am some sort of man hater.  However that could not be further from the truth.  I embrace men (when they let me).   So for my male readership I am predicting that the mankini will be big this year.  The mankini means it’s not just women who can flaunt their curves, so c’mon men don’t be shy.  As Borat would say “VERRRY NIIIICCE”.

Next month – ‘I never wanted to be the sort of woman who tells other women to engage the core, but yet again I have failed’.

Don’t forget you can subscribe to the blog and that way you’ll get some kookbitchy goodness delivered straight to your inbox and I promise I won’t sell your email address to any Nigerian businessmen who will offer you huge sums of money.  I’m going to try to blog every month this year, last year I kinda fell off the wagon because I am often a lazy piece of oul shite.  It’s nice when people subscribe because mainly I’m just extremely needy.